Southeast Michigan Jobs with Justice
Has a New Home

The office will have a supply of ROC’s One Fair Wage petitions to put a proposal on the 2018 state ballot to raise Michigan's minimum wage to $12 for all workers, including tipped workers.


You can pick up petitions to collect signatures at your next membership meeting, block club gathering, or whatever to help put economic fairness in the ballot. SEMJWJ’s One Fair Wage brochures also available at:

Call Helena Scott, SEMJWJ organizer at 313-720-2510 to make other arrangements for petition pickup.

Since the passage of the Affordable Care Act, the number of veterans without health insurance has declined dramatically, to well under 10 percent.
Donald Trump and his Republican Party may try to repeal the ACA, but the one thing that terrifies them is stories of veterans who will lose their care if this bill gets through.
Sign VoteVets petition urging Congress to vote NO on legislation that will repeal the Affordable Care Act. And if you’re a veteran on the ACA, tell us your story.

To: Members of the House Judiciary Committee
Vote in favor of a thorough House investigation into Donald Trump’s use of the presidency to further enrich himself.
To bring about the change working families need for financial security and a say in our economy and political systems, millions of people across the country have been coming out in large actions demanding change. Now, Congressman Nadler is taking this fight to his colleagues demanding that Congress investigate the Trump administration's financial conflicts of interest.
To win an America where all families and communities can thrive, we need to expose how the Trump Agenda seeks to deny people a voice at work and in the economy to pad the pockets of corporations that take advantage of workers.
We’ve never had a situation where the president of the United States refused to separate himself from his investments and maintained conflicts of interests. Our president should work for us, not for himself. Rather than working every day on behalf of working people, maintaining these financial holdings results in him putting his own wealth -- and those of powerful corporations that rig our economy and democracy -- before families like yours.

Donald Trump’s presidency could usher in a crisis for working people across the country.

Since Election Day, Republican lawmakers in Congress and state legislatures are aggressively pushing “right-to-work” laws. They’re paving the way for corporations to increase their power in workplaces and state and national politics.

And now, Donald Trump’s press secretary has indicated “the president believes in ‘right-to-work’” and he wants to do “what’s in the best interest of job creators.”

These policies won’t lead to more manufacturing plants or better jobs. They will only lead to weaker unions, less bargaining power for working people, and lower wages (union and nonunion).

We all benefit from strong unions of working people who bring about a better standard of living – not just for union members. Politicians and CEOs pushing “right to work” want to weaken unions and increase corporate profits because their goal is to make the rich richer.
Sign the petition today telling congressional and state lawmakers that “right to work” is bad for your state and bad for the country.

To: All Members of Congress and State Lawmakers

Townhall: Building an Economy That Works for Everyone

Trump blames China, Mexico and every other country in the world for our economic troubles. But globalization - as well as automation - could have created an economy that worked for everyone, if we truly had a democratic society.

Instead of fighting for the working-class, Trump intends to continue the Reagan policies that led to the extreme inequality of wealth and power that hurt us all - more tax cuts for the Top 1%, more cuts in social programs like Obamacare and more deregulation of banks and corporations.

Time for a NEW New Deal. 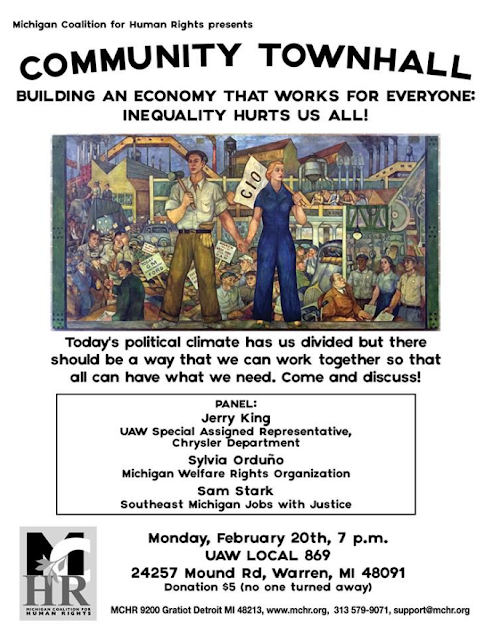 Tools you can use to
TALK PROGRESSIVE with conservatives

“(There’s) a mindset that believes that less government is the highest good no matter what … It’s an ideology that undervalues the common good, says we’re all on our own and what’s in it for me, and how do I do well, but I’m not going to invest in what we need as a community.

“And, as a consequence, you end up seeing an underinvestment in the things that we all share that make us safe, that make us whole, that give us the ability to pursue our own individual dreams. So we underinvest in pipes underground. We underinvest in bridges that we drive on, and the roads that connect us, and the schools that move us forward.”
- President Barack Obama

“Government is the tool we can use to build the kind of society we want.”
- Ken Georgetti, Canadian labor leader

“I’ve always believed what the first Republican President, a guy named Abraham Lincoln, said. He said we should do individually those things that we do best by ourselves. But through our government, we should do together what we can’t do as well for ourselves.”
- President Barack Obama

“Government does what America’s future requires and what the private sector cannot do iris not doing effectively or at all.”
-George Lakoff

Let us never forget that government is ourselves and not an alien power over us. The ultimate rulers of our democracy are not a President and senators and congressmen and government officials, but the voters of this country.
Franklin D. Roosevelt

“Big government is the only thing that could counter balance the power of big business and solve big societal problems like economic depression, racism, and environmental pollution”
Douglas Amy


"Citizens should practically bear in mind that towards the payment of debts there must be revenue; that to have revenue there must be taxes; that no taxes can be devised which are not more or less inconvenient and unpleasant.”
- George Washington

"Taxes, after all, are dues that we pay for the privileges of membership in an organized society.”
- Franklin D. Roosevelt

"Taxes are the lifeblood of government and no taxpayer should be permitted to escape the payment of his just share of the burden of contributing thereto."
- Arthur Vanderbilt

"In theory, taxes should be like shopping. What I buy is government services. What I pay are my taxes."
- P. J. O'Roarke

“Taxes are what we pay for a civilized society.”
-Oliver Wendell Holmes

“There should not be one new dime in tax breaks for millionaires and billionaires as long as millions of children in America are poor, hungry, uneducated and without health coverage.”
Marian Wright Edelman

“The debate about taxes raises two questions:
(1) What kind of society do we want?
(2) How are we going to pay for it?”
David Cay Johnston

“Once you realize that trickle-down economics does not work, you will see the excessive tax cuts for the rich as what they are -- a simple upward redistribution of income, rather than a way to make all of us richer, as we were told.”
― Ha-Joon Chang, 23 Things They Don't Tell You About Capitalism

“The subjects of every state ought to contribute towards the support of the government, as nearly as possible, in proportion to their respective abilities.”
― Adam Smith, The Wealth of Nations

Click on the above link to complete the survey on Redistricting Michigan.


Filling out this brief survey will help bring back democracy to Michigan and help Southeast Michigan Jobs with Justice/Unity Campaign hire a part-time organizer.

And it won't cost you a dime. Thank you. 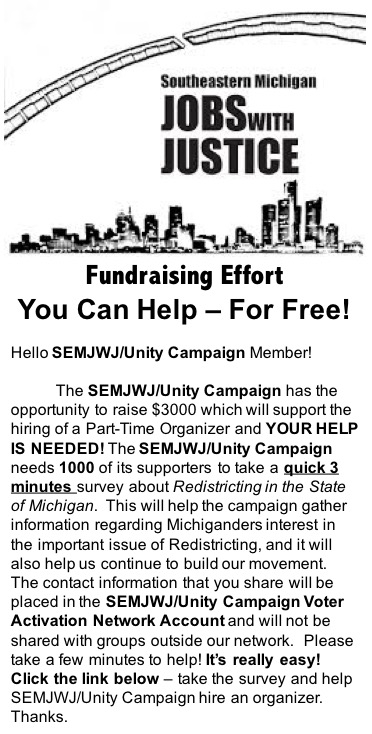 Email ThisBlogThis!Share to TwitterShare to FacebookShare to Pinterest
Older Posts Home
Subscribe to: Posts (Atom)
Joining ... is one of the best decisions you can make. -Minsu Longiaru.
Learn how your organization can join the movement!